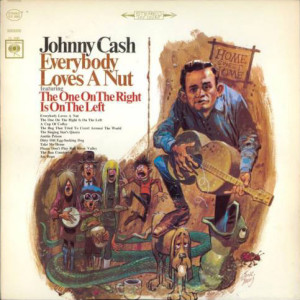 Johnny Cash had a sense of humor.  One of his best characteristics was the breadth of his interests, his ability to strike a lot of different emotional notes, with humor being in that mix alongside his penchant for grim tales of murder, gut-wrenching stories of love and loss, and sincere professions of religious feeling.  Everybody Loves a Nut is a collection of novelty songs.  By this point in Cash’s career, he was looking for new twists on his old formulas.  So this seems like just another gimmick.  And it is a gimmick.  But Cash brings a kind of unselfconscious earnestness to these songs that makes them a lot of fun.  The best-known cut is the satire of the urban folk revival movement, “The One on the Right Is on the Left,” but the title track is pretty good too, and “Please Don’t Play Red River Valley” is a great performance.  Almost a decade later Cash would make his Children’s Album, which took a similar approach without hardly any of the same enthusiasm or flair.  This is a solid second-tier Cash album.