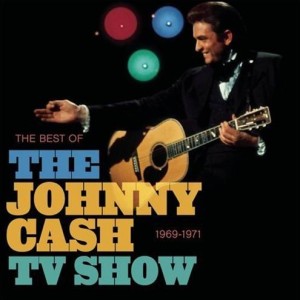 TV variety shows were pretty popular on American networks around the time Johnny Cash got his own in the late 1960s.  It didn’t last long, as in Cash’s view he and the network execs just didn’t see eye-to-eye.  Cash wanting to do a lot of christian material was a big source of friction, supposedly.  The “rural purge” by TV networks also played a significant role.  Anyway, some material from the show had been released on The Johnny Cash Show (1970).  Though the title may be a bit misleading, The Best of The Johnny Cash TV Show: 1969-1971 is entirely different from the earlier album and contains material never before released on record — apparently recorded by Cash and tucked away only to be discovered and restored after his death (something that seems irrelevant given that the TV network’s tapes still exist; the origins of this album seem tied up in licensing disputes between ABC and CBS of no substantive interest to music listeners).  Only a few of the performances are by Cash.  Most are popular artists doing their hits or covering popular country songs.  The performances can be a bit rough, with Cash coughing or other singers just not being miked well.  And Waylon Jennings doing Chuck Berry‘s “Brown Eyed Handsome Man” is cringe worthy (this is the worst of his performances on the episode it was drawn from).  But there are a few nice moments, like Ray Charles doing “Ring of Fire” (though the bass player is a bit off and Ray’s breathy whispered vocals sound like they weren’t captured well).  The best things here though are a duet between Cash and Joni Mitchell backed by strings and piano on Bob Dylan‘s “Girl From the North Country” and James Taylor doing his signature song “Fire and Rain.”  The earlier album from the TV show was better, but this is still enjoyable enough.  This one, however, captures more thoroughly (and however awkwardly) the rural-urban exchange that Cash’s show embodied. Dylan gave an interview where he said, “I think of rock ’n’ roll as a combination of country blues and swing band music, not Chicago blues, and modern pop. Real rock ’n’ roll hasn’t existed since when? 1961, 1962?”  He also said, “And that was extremely threatening for the city fathers, I would think. When they finally recognized what it was, they had to dismantle it, which they did, starting with payola scandals and things like that. The black element was turned into soul music and the white element was turned into English pop. They separated it.”  In a way, Cash’s show brought some of these elements back together, across the music industry’s lines of segregation, maybe not always into an inseparable combination like rock ‘n’ roll but at least on the same nationally televised stage.