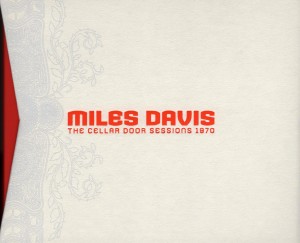 I have some opinions on Miles’ electric period, and on his early 1970s electric period in particular (like what we have here), that might differ from the conventional wisdom.  I think the 1970s might have been Miles’ most consistently interesting period.  I think you can get more from a single song in this period that you get in entire albums the man put out in the 1950s.  There is an open-mindedness, a fluidity that I don’t think any other recording artist has ever really achieved on such a massive scale.  With this particular band, I think there a number of interesting developments that make this set stand out.  These are probably the best recordings Keith Jarrett has ever made.  I know that he talks trash about playing electric with Miles, but frankly, his later solo stuff is just plain boring.  Then there is Gary Bartz.  Compared to the next few saxophonists Miles used up through his silent period, I think Bartz was the most interesting.  He played these long, extended lines — I would even call them thin lines too.  I dig ’em.  The clarity of his lines doesn’t overwhelm the songs, but provide a constant thread throughout his solos despite the looseness of the accompaniments.  I don’t think anyone else really took that approach on a sax in an electric setting.  It adds a cohesiveness by making it difficult to focus on any little bit of the music for too long.  Bartz also could blast his way through a funky, rock-oriented setting without being drowned out better than Miles’ previous sax man Wayne Shorter.

Another area of disagreement with the conventional thinking for me is that I think Miles and Teo Macero did a good job of editing material for release.  People complain about the At Fillmore: Live at the Fillmore East album being heavily edited, but I think the final results sound great, whereas some of the unedited material from roughly the same period (In Concert: Live at Philharmonic Hall) sounds terribly unfocused.  And I think this plays into my belief that Miles was actually fine tuning his approach through the 1970s.  He was more consistent just before his temporary retirement than when the 70s opened.  So, getting back to this Cellar Door set, I think it has a very loose, jammy sound to it.  Occasionally, the band muffs something or other.  Bassist Michael Henderson sometimes hasn’t fully integrated himself into the band until some of the later sets.  You also might not call this the strongest playing from Miles himself, at least not consistently.  But no matter.  I think this is very enjoyable and interesting stuff.  Lots of energy.  Perhaps the edited, reorganized presentation that ended up forming most of Live-Evil sounds just a bit better on the whole.  But this unedited presentation still sounds fine — actually better than just fine most of the time.  With adequate time to sit back and enjoy this whole damn collection on its own terms, with the occasional missteps and the more tentative early sets all included, the band still can cook.  That’s what it was always about.