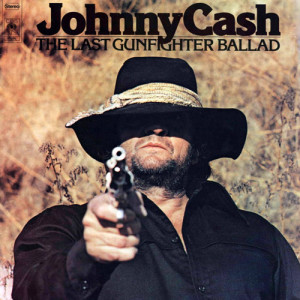 As the 1970s wore on, Johnny Cash had more and more difficulty finding enough suitable songs to fill an album.  The song selection on The Last Gunfighter Ballad ranges from the decent (Guy Clark‘s “The Last Gunfighter Ballad”) to the tedious (Terry Smith’s “Far Side Banks of Jordan”).  Three songs he had previously recorded.  He also was more and more likely to give a half-hearted effort singing.  But unlike most of the lesser stuff of Cash’s lean forgotten years, the bad stuff is not just boring but truly awful.  The opener “I Will Dance With You” is perhaps the very worst Cash performance on record…and some moron decided to put it first on the album!  Same goes for “You’re So Close to Me,” which opens side two.  Lots of other stuff actually feels almost like leftovers from the One Piece at a Time sessions, or at least attempts to do more of the same (“City Jail”).  Yet, it’s a shame and a waste that “Give It Away,” with a nice gospel-style vocal chorus, is a fine performance of a corny song.  And “Cindy, I Love You” has a guitar part derivative of “You’ve Got a New Light Shining In Your Eyes” but still ends up being a terrific song.  There definitely are some gems here.  This is probably the most uneven album Cash made in the 1970s.  He makes it hard to love or hate this in its entirety, and it will take a died-in-the-wool Cash fan to appreciate this motley beast as a whole.  But, yes, it still boasts one hell of an album cover photo.