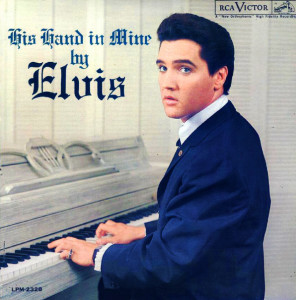 Elvis was a legitimate fan of gospel music.  So it should be no surprise that he can reproduce the style of The Trumpeteers on “Milky White Way”, The Golden Gate Quartet on “Joshua Fit the Battle [of Jericho]”, The Staple Singers on “Swing Down Sweet Chariot”, and so on.  It is somewhat amusing to hear Elvis embarrass himself on whitewashed version of these songs.  Well, that’s a bit harsh.  It’s not that the performances are that bad per se, but a hallmark of gospel music has been song arrangements.  You can measure a gospel act by how they put their personal stamp on their rendition of a gospel standard.  Elvis just doesn’t deliver on that score.  The arrangements here all tend to be highly derivative of classic pre-existing recordings, and to the extent they sound a little different it’s only because of the uniformly bland, rubber-stamp 50s-pop backing harmonies.  This is just making black music more palatable to white audiences, and that holds little interest more than fifty years later.  From another, kinder perspective you could say Elvis knew how to pick good songs, but in his performances he’s too deferential here to the artists whose versions of the songs inspired him.  Either way this album is self-indulgent and stupid.  Elvis’ two later gospel albums How Great Thou Art (1967) and He Touched Me (1972) are both much superior.