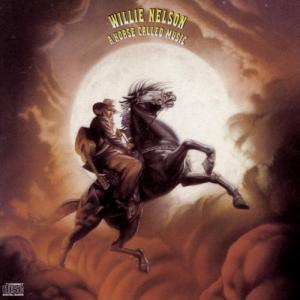 More pop than country, A Horse Called Music finds Mr. Willie Nelson mastering the synthetic sounds of 1980s pop.  That’s right.  This one is much more of a pop record than a country one.  There are strings and lush background vocals on much of it, returning to country briefly, such as for yet another rendition of his “Mr. Record Man” and the opener.  This thing fairly reeks of the 1980s, yet, the songs are by and large much better choices than on so many of his other albums of the era.  He’s also singing fairly well.  “Is The Better Part Over” was written five years earlier about Nelson’s third marriage to Connie, the wife his band liked best.  “Nothing I Can Do About It Now” was the hit, Nelson’s last really big one until a duet with Toby Keith more than a decade later, but it’s really one of the lesser cuts on the album.  The best stuff here is actually the orchestrated traditional pop.  It does bear mentioning that this has one of the most amazing album covers on any Willie Nelson album, and the title is quite funny too.