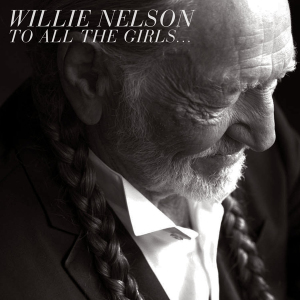 Willie Nelson has kept touring and recording a hell of a lot longer than anyone ever would have guessed.  Many of those later-career recordings are decent but not of much consequence.  They feel tossed off and somewhat lazy.  But returning to a major label he has recorded a few albums in recent years that sound much more elaborate and polished than what he was doing in the early 2000s.  Another problematic feature of his recent work has been the gimmicks, from stupid genre exercises like the reggae album Countryman to faddish, star-studded guest performer albums like The Great Divide.  He’s made some dubious choices when it comes to quality control.  But he’s still a guy with a great voice, and when he pulls himself together and puts forth some effort he’s still capable of good things.  Against the odds, To All the Girls… is an unlikely late-career success.  The title reflects that each song features a different female guest performer.  There is a certain stylistic diversity, allowing individaul songs to lean on the strengths of the guests — from a Bill Withers cover with Mavis Staples to western swing with Shelby Lynne.  But much of this has an easy listening feel — appropriate given that Willie is now eighty years young — and he comes across as more engaged with that sort of a sound than just about any time in memory.  Nothing here jumps out as particularly notable.  But Willie has hardly made an album this consistently listenable from top to bottom in more than a decade.  There is a gentle touch in the recordings that suit that approach quite well, with unobtrusive strings and other little embellishments that enrich the performances without taking away from the singing and guitar solos that rightly remain the focus.  The guest performers for the most part all turn in nice performances (the biggest dud being the outing with his daughter Paula Nelson), and the song selections are appropriate ones for both Willie and the guests, which is perhaps the most difficult aspect in pulling off a project like this.  If you can handle Willie’s more polished and lighter tendencies then you might well rank this as his best since 1998’s Teatro.