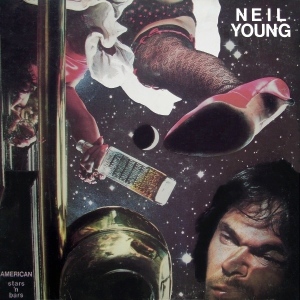 After his “Gloom Trilogy” and the slightly overrated Zuma, the somewhat scattershot American Stars ‘n Bars seems like the perfect move for Neil Young.  First of all, he sounds like he’s having fun making music for the first time in years–even if those intervening years produced amazing recordings.  Side one is the real highlight.  Carole Mayedo, Linda Ronstadt and Nicolette Larson make great contributions.  It’s country rock, but with a ragged rock ‘n roll heart that Neil wears so proudly on his sleeve.  “Saddle Up the Palomino” has a little up and down runs played so slowly you can almost picture Young in the studio waving his arms wildly like a conductor, in a vague and comically half-hearted attempt to coax the musicians gathered for a late-night session that hadn’t been sober for hours, if it ever was to begin with. “Hey Babe” is Neil Young the sweetheart, at least, Young the sweetheart singing double entendres in a quaking, nasal falsetto.  This less wholesome attitude comes back with a vengeance on the rockingest track on the first side, “Bite the Bullet.”  Side one goes many places, most of them mapped out on the opener “The Old Country Waltz,” which simultaneously proves Young’s bona fides in the realms of country and rock.  It’s a song with smooth three-part vocal harmonies, a slurred fiddle, pedal steel guitar and room for a rather steady strum of an acoustic guitar and heavy drum beats on a snare.  No concern for precision stands in the way of matters to the heart of the song.

The second side is made up of leftovers from a couple of aborted album projects from the previous three years.  The country leanings of side one are gone, in its place some harrowing, solitary folk (“Will to Love”) and a hazy, laid-back guitar anthem set against sustained, spaced-out keyboard chords (“Like a Hurricane”).  It is somewhat fitting that after the completely wasted sound of side one Young has to mail in last week’s homework for side two–his own kind of Sunday morning coming down.  The thing is, most artists would never make stuff as good as anything on side two, much less have it around to use as filler!  Young makes that sort of complete indifference the noble, slacker heart of the album.

There are definitely different sides to Neil Young, but the side of him that favors a wild ride, replete with a few “fuck off and let me do my thing” laughs, and revels in bawdy inside jokes, was one that made only more tentative appearances in the coming years.  That makes this a little special.  Of course, all that is tempered with a sensitive side that suddenly drops all pretense and demonstrates inquisitiveness and vulnerability. He does all that, and owns the contradictions.  This is Neil Young the perfect anti-hero rock star, one who comes across as simply too well-adjusted, by comparison, to be a “real” rock star.  In other words, one for the rest of us.  Dean Stockwell‘s album cover concept sums this one up.