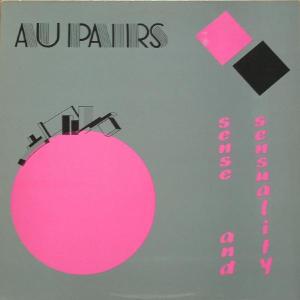 After Au Pairs’ critically-lauded, feminist punk debut album Playing With a Different Sex, the band returned the following year with the much different Sense and Sensuality.  While the debut focused on compact, driving and funky punk songs, the follow-up moved in many different directions.  This eclectic approach has garnered it mixed reviews.  On the one hand, there is still a lot of feminist rage, and angular, funky cuts are still to be found (“Intact”).  Yet there is a slicker and more sinister approach to the way Sense and Sensualilty was recorded.  It makes a more ominous use of space.  Take “Stepping Out of Line,” for instance.  It has icy, repetitive guitar in abundance, highly compressed drums, and some synth, with the bass pushed far down in the mix.  It bears some resemblance to Magazine‘s Secondhand Daylight.  It’s the relative absence of a regular bass line that most noticeably differentiates this from the previous effort.  Elsewhere there are clear jazz influences, from the retro-lounge vocals on “Tongue in Cheek” to the slightly dissonant horn charts on “That’s When It’s Worth It.”  Songs like “Sex Without Stress” have a punk edge, but are altogether poppier than on the debut, foreshadowing the (much-maligned) direction Gang of Four would take the following year with Hard.  Au Pair’s experiments don’t fail, exactly, but the dark and brooding tone doesn’t generate the anthemic blend of feminist militancy and smart humor that has endeared so many fans to Playing With a Different Sex.

It’s worth noting that, like reissues of albums by X-Ray Spex and The Fall, reissues of Sense and Sensuality have reordered the original track listing — even Stepping Out of Line: The Anthology disregards the original track sequence.  It’s worth taking this in the original sequencing, that opens with “Don’t Lie Back,”  because that gives the lyrical and thematic focus of the songs a slower pace to develop.